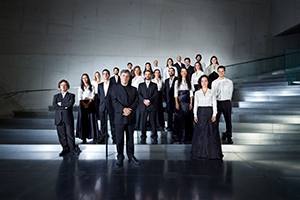 Coro Casa da Música gave its first concert in 2009 under the direction of Paul Hillier, its principal conductor. Based around a core membership of 20, the choir is regularly enlarged to take on medium and full symphonic choral duties, fulfilling a key role in the performance of repertoire from the Renaissance to the present day, both a cappella and with orchestra. They perform with the other groups of Casa da Música, its symphony orchestra, baroque orchestra and Remix contemporary music ensemble.

The a cappella programme regularly includes Portuguese music, as well as a wide variety of thematic concerts. They have presented the Portuguese premieres of various works and the world premiere of Carlo Gesualdo’s Motets, in a version reconstructed by James Wood.

Coro Casa da Música has performed in Lisbon, Alcobaça, Tomar, Batalha and Arouca making a tour of Portuguese World Heritage Monasteries. They also travelled to the Azores and to Spain, to take part in the Úbeda y Baeza Early Music Festival, and performed at the Handel Festival in London. In 2012 they return to England to take part in the Huddersfield Contemporary Music Festival.