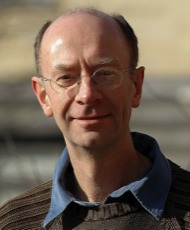 Conductor, composer, instrument designer, musicologist and formerly virtuoso percussionist, organist and cellist, James Wood’s multi-faceted career has led him into an extraordinarily broad spectrum of musical activities. Born in 1953 he studied composition with Nadia Boulanger in Paris before going to Cambridge as an organ scholar, and to the Royal Academy of Music in London to study conducting and percussion. For the next twenty years he pursued a triple career as composer, conductor and solo percussionist. He founded the New London Chamber Choir (1981), soon to become celebrated throughout Europe for its ground-breaking performances and recordings of contemporary music, and led the group until 2007. During this period he was also professor of percussion at Darmstadt, founder and director of the Centre for Microtonal Music in London and its ensemble, Critical Band, whilst remaining prolific as a composer.

Since the mid-1990s he has focussed more on composition and conducting, working with ensembles such as musikFabrik, London Sinfonietta, Ensemble InterContemporain and Champ d’Action. As a composer he has written for almost every conceivable genre, and is especially known for his percussion music, his designing and building of new instruments, and for his work in electronics. As a choral conductor he works regularly with most of Europe’s leading chamber choirs in repertoire from 15th Century to the present day.

2015 saw the highly successful world premiere of his Lamentations by Vocalconsort Berlin, and this work was repeated at the Semana de Musica Religiosa Cuenca in March 2016. He is currently composing a new work for chamber choir, piano and percussion quartet for RIAS Kammerchor. Awards include the Lili Boulanger Memorial Award (1979), Gemini Fellowship (1993), Arts Foundation Fellowship for electro-acoustic composition (1996) and the Holst Foundation Fellowship (1996).