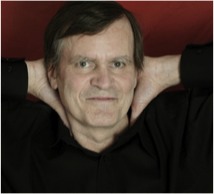 Born in 1948 in Rome, Philippe Hersant studied music at the Paris Conservatory, notably in the composition class of André Jolivet, before residing at the Casa Velasquez from 1970 to 1972 and then at the Villa Medici from 1978 to 1980. Since 1973 he has been a producer for radio broadcasts with France Musique .

After completing his music studies towards 1970, Philippe Hersant set aside for himself a decade in which to find his own language. His patient maturation had more to do with books and words than the exclusive study of his art – with the exception of many kinds of extra-European types of music. An avid reader (he has a degree in letters) and also a lover of the cinema, he has drawn on the most varied literary sources (James Joyce, the German Romantics and many poets from the Orient and the Far-East) and also cinematographic sources (he declares a particular predilection for Fellini and for the eminent position the latter assigns to memory).

With a varied catalogue of around ninety pieces (not counting his scores for the cinema and the theatre), Philippe Hersant has achieved broad recognition on the contemporary music scene. He has received commissions from such illustrious institutions as the French Ministry of Culture, Radio France (Le Château des Carpathes, in 1991, Trio, Violin Concerto; not forgetting that he was the featured guest of the festival Présences in 2004), Paris Opera (the ballet Wuthering Heights, in 2002) Leipzig Opera (the opera Le Moine noir, in 2006), the Orchestre National de Lyon (Streams, in 2000). In addition, the musical world has awarded him many distinctions: Grand Prix Musical de la Ville de Paris (1990), Composers’ Prize from the SACEM (1991), Grand Prix SACEM for symphonic music (1998), Grand Prix of the Del Duca Foundation (2001), and two Music Awards (Victoires de la Musique) in 2005 & 2010.