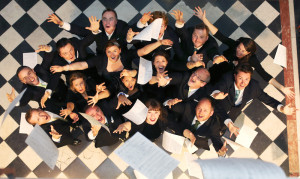 Chamber Choir Ireland is the country’s flagship choral ensemble and national chamber choir under the internationally celebrated and multi-award-winning conductor Paul Hillier as Artistic Director. The Choir is recognised for its unique approach to creative commissioning, recording and programming, and has gained a reputation for the high artistic quality of its performances. The Choir remains a thriving force on a very active choral scene both in Ireland and internationally.

The Choir has made a significant contribution to the development of contemporary Irish choral music through its commitment to commissioning new work. The Choir’s repertoire spans from early to contemporary music, together with regular commissions of pioneering choral work by both Irish and International composers. Commissions have included composers such as Gerald Barry, Tarik O’Regan, Kevin Volans, Andrew Hamilton, Siobhán Cleary, David Fennessy, Stephen McNeff and Jennifer Walshe.

The Choir has a strong commitment to touring in Ireland and continues to develop its touring network in order to present high quality choral concerts to audiences all around the country.

Internationally, the Choir has toured in Europe, Asia, Russian and North & South America including a performance in The White House in March 2011.

In recent years the Choir has a renewed commitment to recording with releases including One Day Fine on the RTÉ Lyric FM label, Acallam na Senórach and Carols from the Old and New Worlds Vol. 3 on the Harmonia Mundi label, as well as a recording to accompany the publication of Choirland: An Anthology of Irish Choral Music in collaboration with the Contemporary Music Centre and the Association of Irish Choirs. Future releases include the world premiere recording of works by Gerald Barry featuring the Crash Ensemble in 2016.

The Choir continues to foster relationships with other distinguished performing ensembles and organisations both at home and abroad and has collaborated with the Crash Ensemble, Theatre of Voices, Irish Baroque Orchestra, Kronos Quartet, Irish Chamber Orchestra, Contemporary Music Centre, and the Association of Irish Choirs. The Choir enjoys a unique relationship with Cork International Choral Festival where it is Choir-in-Residence on an annual basis.

2016 sees the reintroduction of the Choir’s Learning and Participation programme with a series of projects directed towards the next generation of Irish choral singers and composers.

The Choir is a resident ensemble in the National Concert Hall.