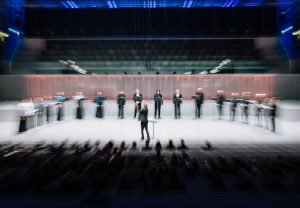 Since its formation, Coro Casa da Música has performed several world premieres, including works by Michael Gordon, Gregory Rose, Manuel Hidalgo, Carlos Caires and a rediscovered work by Lopes-Graça. In 2020, it shared with Remix Ensemble the world premiere of Francesco Filidei’s Requiem. Its repertoire includes Portuguese premieres of prominent contemporary composers as Birtwistle, Manoury, Dillon, Haas or Rihm, and other key figures from the 20th and 21st centuries, as Lachenmann, Schoenberg, Stockhausen, Gubaidulina or Cage.

Portuguese music has been one of the main focus of the choir, in programmes dedicated to the golden age of Renaissance polyphony, Lopes-Graça and symphonic choral works by Bomtempo and António Teixeira.

In 2021, Coro Casa da Música covers large periods of the choral music history, from the Renaissance madrigal to the Portuguese premiere of a new work by Luca Francesconi. Together with Casa da Música orchestras, it performs the complete Bach’s Christmas Oratorio and Mozart’s Requiem.