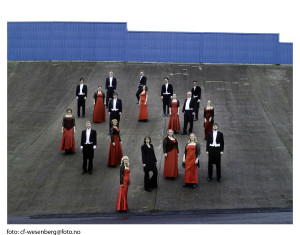 The motive powers behind the activities of Det Norske Solistkor (the Norwegian Soloists’ Choir) consist of high musical standards, a strong awareness of tradition, and an equally strong musical inquisitiveness. The choir was established in 1950 by the Norwegian Soloists’ Society with the aim of becoming an elite ensemble for performing choral music at the highest possible standard. It occupies a unique position in the music life of Norway. The choir has given over two hundred premiere performances of which over seventy have been of works by Norwegian composers.

The choir’s first conductor was Knut Nystedt, who led the ensemble for forty years. In 1990 Grete Pedersen took over as conductor and is the current artistic director. The members of the Norwegian Soloists’ Choir are professionally trained, hand-picked singers, all of whom are potential soloists in their respective genres. The Norwegian Soloists’ Choir performs in Norway and in other countries, at venues ranging from concert halls and churches to ball rooms and bus garages. The choir maintains a youthful profile, receptive to and willing to perform newly written works, while at the same time retaining a fundament of classical works from the Nordic and international choral repertoire.