Home » About us » Members » DR Vokalensemblet 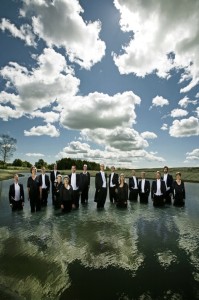 “20 seconds … after which all I could say was ‘Hoorah!’ And I went on saying it, interspersed every now and again with ‘Wow!’… This is some of the most beautiful and moving choral singing I have ever heard.” So wrote BBC Music Magazine’s reviewer about the Danish National Vocal Ensemble’s recording of Francis Poulenc’s sophisticated choral music; one of the few but remarkable recordings the ensemble has released.

Recordings
The Danish National Vocal Ensemble has recorded a long succession of CDs. In 2012 the Vocal Ensemble was awarded the prestigious German Echo music prize for the CD The Nightingale, made with the recorder virtuoso Michala Petri. Other new CDs include Per Nørgård’s large choral work Libra and the above-mentioned recording of Francis Poulenc’s sophisticated choral music. A CD with music by Heise, conducted by Michael Schønwandt, is in the pipeline.