Home » About us » Members » Helsingin kamarikuoro 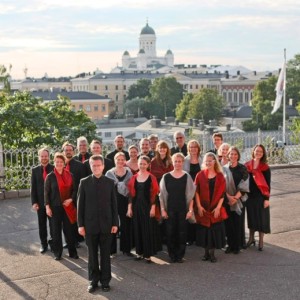 The Helsinki Chamber Choir was founded in 1962 as the Finnish Radio Chamber Choir. It assumed its current name in May 2005, when the Finnish Broadcasting Company, YLE, withdrew its funding. Since then, the choir has maintained an independent presence as Finland’s only chamber choir made up of professional singers and has continued to ­perform the most demanding works in the contemporary choral­ ­repertoire. The choir regularly commissions new works, mostly from Finnish composers, and its performances are still regularly broadcast by YLE.

The choir’s Artistic Director in 2005–2007 was the ­composer Kimmo Hakola. Since June 2007 the choir’s Artistic Advisor has been the conductor Nils Schweckendiek. The choir works with leading choral and orchestral conductors both from Finland and abroad.

The number of singers in the Helsinki Chamber Choir ­varies according to the requirements of the repertoire at hand. ­Although specialised in new music, the Helsinki Chamber Choir likes to programme demanding contemporary works alongside music ranging from Gregorian chant to Renaissance, Baroque, Classical, Romantic and 20th-century masterpieces, believing that different styles complement each other to their mutual advantage. Alongside Finnish commissions, the choir has recently performed music by today’s leading choral composers, such as Eino­juhani Rautavaara, Jonathan Harvey, Heinz Holliger, Karlheinz Stockhausen, Luciano Berio, György Kurtag and Steve Reich, to ­critical acclaim.