Home » About us » Members » Nederlands Kamerkoor 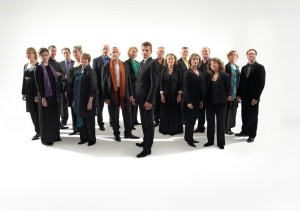 The Nederlands Kamerkoor exists almost 80 years now and has been a world top choir for decades. The Nederlands Kamerkoor has been internationally praised by critics for its homogeneous sound and for the soloist quality of the singers. One of the choir’s missions is to keep choral music very much alive as an art form, by looking for new formats, by innovative commissions and exciting collaborations. It results in concerts that are not only perceived as beautiful, but that appeal to all senses.

Education and participation is a vital part of the choir’s mission. The Netherlands has thousands of amateur choirs and numbers of youth choirs. The Nederlands Kamerkoor provides coaching, workshops, and ‘adopts’ choirs as supporting act for their own concerts.

Besides their own concert series, the choir often collaborates with renowned ensembles such as the Royal Concertgebouw Orchestra, ASKO|Schönberg, La Fenice and Concert Lorrain. The choir has recorded over 75 CDs, of which many have been awarded.

Two young conductors worked with Nederlands Kamerkoor under direction of Daniel Reuss at the second workshop of the 2015 Tenso Masterclass for Conductors, which will take place at the 19th edition of Europa Cantat in Pécs, Hungary. More information.