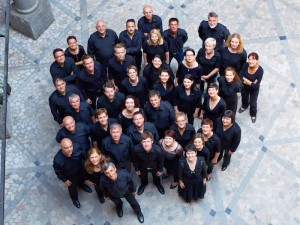 The Slovenian Philharmonic Choir was established as a professional choir under the name the Slovenian Chamber Choir in 1991. Until autumn 2009, it was led by Dr Mirko Cuderman, and for the seasons from 2009/10 to 2011/12 by conductors Martina Batič and Steffen Schreyer. In the 2012/13 season, Martina Batič took over the artistic direction in its entirety.

This 40-member choir, which has been part of the Slovenian Philharmonic since 1998, performs an average of 35 concerts each season, and as many different programmes. It focuses primarily on a cappella compositions from various musical periods, which feature especially in the Philharmonic’s Vocal Series, but it also collaborates with the Slovenian Philharmonic Orchestra, as well as other Slovenian and foreign orchestras, in the performance of vocal-instrumental works.

In addition to working with established Slovenian choral conductors, within the framework of the Vocal Series, the Slovenian Philharmonic Choir is also led by renowned foreign conductors such as Ericson, Gronostay, Kaljuste, Layton, Theuring, Putniņš and others. At concerts of vocal-instrumental works, the choir has been conducted by such celebrated conductors as Gergiev, Haenchen, Muti, Seeliger and Penderecki. In November 2012, the Slovenian Philharmonic Orchestra and Choir toured Europe with a concert performance of the opera Iolanta by Pyotr Ilyich Tchaikovsky, appearing in famous concert halls in Stuttgart, Munich, Amsterdam, Paris, Berlin, Nuremberg, Prague, Essen and Vienna. With celebrated soprano Anna Netrebko in the leading role and under the baton of Emmanuel Villaume, their performance was recorded for the Deutsche Grammophon record label.

The Slovenian Philharmonic Choir is frequently involved in recording projects. Its substantial discography numbers more than 80 compact discs in the collections Musica sacra Slovenica and Slovenska zborovska glasba, presenting an anthological selection of Slovenian choral music, both sacred and secular. Its last release was in 2014, when a fertile collaboration with composer Ambrož Čopi gave rise to a new compact disc featuring his works entitled Sanjam.

In July 2015, the Slovenian Philharmonic Choir participated in the largest European festival of choral music, Europa Cantat 2015 in Pécs, Hungary, presenting an entire concert of contemporary Slovenian choral music within the framework of the festival’s Slovenian Day.