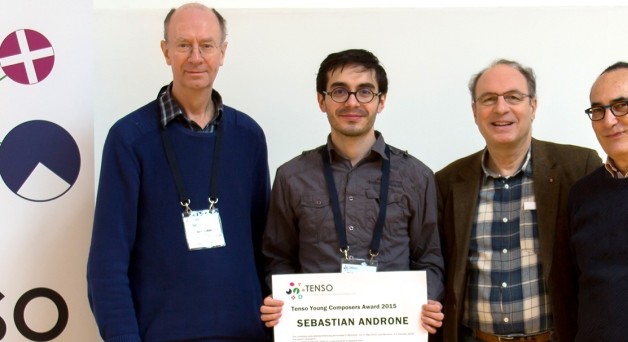 The 2015 edition of the annual Tenso Young Composers Award – which comprises a commission for a piece for chamber choir, to be performed by Tenso members – was granted to Romanian composer Sebastian Androne.

Three young composers – Sebastian Androne, Sofia Borges and Léo Collin – were invited for the second round of the 2015 edition of Tenso Young Composers Workshop. The workshop took place in February 2016 in Marseille, at the headquarters of Tenso member Musicatreize. There, they worked with composer/conductor James Wood, composer Leo Samama, conductor Roland Hayrabedian and chamber choir Musicatreize on their own pieces for chamber choir.

The jury, consisting of James Wood, Leo Samama, Roland Hayrabedian and singers of Musicatreize, decided that the award, which is a commission to write a piece to be performed by Tenso choirs, should go to Sebastian Androne,

“who showed the most progress in the workshop sessions, and who may profit most from the coaching and the ideas developed during the sessions. The music he brought to the workshop touched the jury, performers and audience. His choice of lyrics –­ from the diary of British-born queen Marie of Romania – was a real discovery. Androne uses a highly communicative musical language, showing sophistication in both horizontal (melodic) and vertical (harmonic) lines,”

according to the jury report.

Read more about the 2015 edition of Tenso Young Composers Workshop.

The conductors Mariana Delgadillo Espinoza, Tobias Walenciak and Yuval Weinberg have been selected for the Masterclass for Conductors, Tenso Days 2016, working with Grete Pedersen...read more →

As part of Tenso’s project 14-18 : from Poetry to Music, we organize a special edition of the composers workshop for young composers from Central...read more →