At the invitation of Pierre Boulez, Reuss taught and conducted at the summer 2006 Lucerne Festival Academy. He regularly participates in workshops for singers and conductors. Reuss has been invited to conduct chamber ensembles and orchestras throughout Europe. Among these may be mentioned the Akademie für Alte Musik Berlin, MusikFabrik, Scharoun Ensemble and the Radio Chamber Philharmonic. More details 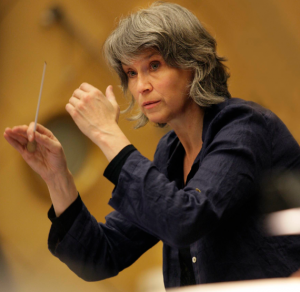 Grete Pedersen has received international acclaim for her stylistically assured and musically convincing performances. Through a great number of concerts in Norway and abroad, recordings for radio and television, and CD recordings, she has become one of the most noted and sought-after conductors in the Nordic countries.

Conductor, composer, musicologist and formerly virtuoso percussionist James Wood has worked with many Tenso choirs, such as RIAS, Helsingin kamarikuoro and Latvijas Radio Koris, among others. His compositions have been performed by choirs in and outside Europe. For more details, see his full biography.

He has been coach and conductor of Tenso Workshop for Young Composers since 2010. In 2016, he will join the coaching team of the masterclass for conductors.