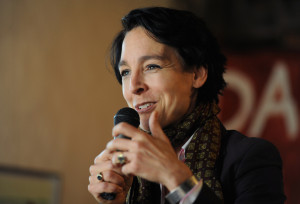 Andrea Thilo studied Social and Business Communication Studies at the Universität der Künste in Berlin. She completed a traineeship at the German public broadcaster NDR, worked as TV-reporter and editor for NDR and ARD and ran the art consulting company KUNSTKONZEPT from 1990-92. From 1995-97, she presented the weekly show “liebe sünde” on Pro 7 and reported for the European BBC1 show ‘The E-Files’ on a freelance basis.

Since 1998, Andrea Thilo has worked as a film producer and freelance journalist (mostly for DIE ZEIT). Regularly, she is booked as host for conferences, World Cafés, open space formats and other events, especially in the field of arts & culture, education and sustainability.

In 1999, Andrea Thilo founded the production company BOOMTOWN MEDIA GmbH+CoKG in Berlin together with her partners Thomas Grube and Uwe Dierks. Their first production, called WARSCHAU EXPRESS, was nominated for the German television award in 2000. Five years later, the producer trio Thilo, Grube & Dierks got awarded the German Film Prize for the internationally recognized box office hit RHYTHM IS IT!. The documentary film about the education work of the Berlin Philharmonic orchestra and Sir Simon Rattle attracted more than 670,000 viewers alone in Germany and was sold to 15 other countries. In 2008, TRIP TO ASIA was released in German cinemas and in various European countries. Other cinema documentaries had been released soon after: PORGY & ME | IN THE WORLD OF GERSHWINS ́PORGY & BESS and PEACE PUNCH | THE YEAR OF DECISION.

Andrea Thilo, mother of two daughters, left her company BOOMTOWN MEDIA at the end of 2010 to further connect and communicate in the field of arts and culture, learning and sustainability.