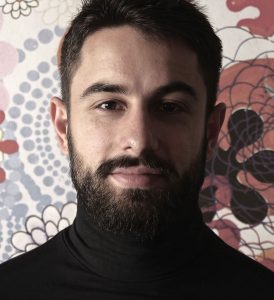 Jug K. Marković (*1987) is a Serbian, Belgrade based composer. He believes in non-cerebral, highly intuitive, impulsive and passion driven composing. Jug was born in Belgrade where he graduated at the Faculty of Philosophy and afterwards at the Faculty of Music Art in Belgrade. Apart from his principal teachers Vlastimir Trajković and Zoran Erić, he has been tutored multiple times by the British composer Michael Finnissy. In addition, he had attended masterclasses with renowned composers such as Enno Poppe, Georges Aperghis, Mark Andre, John Corigliano, Fabien Levy, Raphael Cendo, Richard Barret etc. Marković was a composer in residency at Snape Maltings, UK (supported by ENOA and Aldeburgh Music) in where he was tutored by Mr. Finnissy and composer in residence at the “Festival d’Aix-en-Provence” for which he frote pieces incidances and Ultraterreno respectively. Marković is the winner of the TENSO young composers award 2017 and winner of the 3rd Anton Matasovsky Composers Competition in Vienna, for his piece Egon (Austria, 2017). He was also awarded the 1st prize at the Hong Kong Inernational Percussion Convention Competition (China, 2016) for piece Hydra, the Special Prize at Busan Maru International Competition (South Korea, 2016) and Josip Slavenski prize (Serbia, 2015) for piece Magistralen. He attended Impuls Academy for Contemporary Music in Graz (2017), where he collaborated with ensemble Klangforum Wien on his piece mother Tongue that was conducted by Enno Poppe. Jug was also a participant of the 47th Darmstadt Summer Course, ManiFeste academy (Ircam 2017), TENSO young composers workshop 2017 (The Professional Network of European Chamber Choirs), Britten Pears Young Artists Program (2017) and “Donaueschinger Musiktage” (Germany) where his piece Magistralen (for septet) was performed within the “Next Generation” program. He is also a frequent participant of residency programs and workshops organized by ENOA (European Network of Opera Academies).

Marković was recently admitted to 2018 ManiFeste Academy under tutelage of Marko Nikodijević and members of Ensemble Intercontemporain and also 2018 IDEA (International Divertimento Ensemble Academy) under tutelage of Mauro Lanza and Stefano Gervasoni where he will developnew pieces for conducted ensembles and for solo instrument.