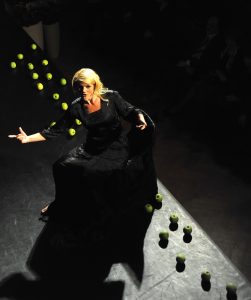 Karmina Šilec is the artistic director of Carmina Slovenica and Choregie – new music theatre, a conductor and stage director. With her concept “Choregie – vocal theatre or theatre of voices” she has brought freshness and originality to the world of vocal music and theatre. Artistically it parallels different types of music and texts; by merging the old and the contemporary it creates new, exciting contexts in music theatre. Her projects are provocative, daring; her ideas break taboos, those of the society as well as music.

Karmina Šilec has received the ITI – Music Theatre Now award in the category Music Beyond Opera, the International Robert Edler Prize for her exceptional contribution to the world choir movement, the Prešeren Award; and together with her companies: the Golden Mask  theatre award and more than 20 other international awards.

In 2017 she was nominated for the Europe Theatre Prize Theatrical Realities (EPTR).

In 2018/2019 she will be artistic fellow at Radcliffe Institute at Harvard University (USA).

For many years Karmina Šilec has had an intense focus on performing mostly new music in the context of stage productions. She has developed the artistic concept Choregie. Choregie focuses on the creation process that brings the musical notion of composing to the theatrical aspects of performing and staging. In Choregie a ‘meta composition’ is created by positioning different music and other theatrical materials into a bigger composition. Different elements in the performance merge into one (movement, singing, word, visual), all means are used either in a balance or in favor of one; the fusion of all this gives very different semantic directions.

Music which represents the very base and the core of all her projects is music of our time as well as music which is not commonly heard on stages and is thus considered new, such as early music or music taken from certain contexts, e.g. sociological or historical. The treatment of music, voice, movement, light, words, image, sound, gesture and other elements of theatrical production is mostly based on musical principles and compositional techniques, and so musical thinking applies to the performance as a whole. Music, visual, drama and motion are directly connected. It is a natural continuation from vocalization to movement, from movement to installation into a stage/space.

In a creative process Šilec is interested in the things that do not only have an unambiguous meaning. Different elements in the performance merge into one (movement, music, word, the visual); all means are used either in balance or in favor of one element. The fusion of all this gives various semantic directions. Music itself becomes interesting in other ways as it gets references in a non-musical world. Inside this open field a dialogue starts between the sound and the space, between the space and performers, between performers and the audience, between the audience and the sound. The sound and the visual carry different meanings and through this coexistence a new meaning can be achieved. The viewers travel freely around the whole Choregie field between sound and the visual, between certain details and the whole picture. Choregie projects are ”theatrical” but without the ”traditional” elements of theatre; that which is dramatic comes from the way music and its performance and not through ”act” in a classical sense.

In her project voice becomes, embodies, transforms into a completely different character, a different spirit. It has a direct link to the whole specter of emotions. A psychoanalytical language of sounds is built as sounds create a “sound landscape” which controls the stage or space. By following innovations in terms of comprehending beauty and the depth of the meaning of voice, her projects are a rich presentation of various sound colours.