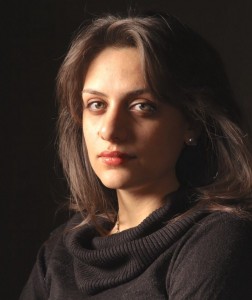 It is with great pleasure that the Tenso Young Composers Award 2016 has been awarded to Aftab Darvishi. With rather simple means, she wrote a convincing piece that is both contemporary and moving. We hope that this award will encourage her to further develop her skills as a composer – helped by the coaching offered by Tenso – and look forward to her new work.

The fifth edition of the workshop, which was organized for the first time in 2010, initially chose five composers from more than 30 applicants from all over Europe. During two sessions in Mechelen in May 2016, the workshop leaders worked with the young composers and heard their scores performed by Latvijas Radio Koris. Three finalists where chosen to participate in the second round in Copenhagen in October 2016: Aftab Darvishi, Piyawat Louilarpprasert and Sophie Sparkes. Read more about them.

The workshop that took place during Tenso Days Copenhagen was coached by composer/conductor James Wood, composer Leo Samama, and performed by the chamber choir Helsingin kamarikuoro. Tenso would especially like to thank the singers of the choir for their close collaboration with the composers.

The three composers selected for the second round chose their texts from the period 1914-1918, as part of Tenso’s project 14-18 From Poetry to Music. All three composers chose to work with an English text, two written by soldiers in the trenches, one by a woman who lost her fiancee.

The workshop sessions result in commissioning one of the composers to write a new work, to be premiered by one of the members of the Tenso network in the next season. The jury, consisting of coaches James Wood, Leo Samama, external expert Bernhard Hess, and Helsingin kamarikuoro, decided to award the commission to the composer who showed the most understanding of the human voice, and of the relation between text and music.