In their evaluation, the jury wrote about Georgi Sztojanov:

“Georgi Sztojanov ( Bulgaria/ Hungary, 1985) brought very interesting experiments to the workshops. It is clear that he feels completely at ease with the natural flow of the language, and his settings of WWI postcard scribbles are poignant and effective. The jury would like to see him move away from the intense harmonic density he now often uses as an expressional tool, and advises him to rely more on his – clearly strong – sense for melody and rhythm, taking the text as point of departure. Also, being a singer himself, he sometimes caters too much to the needs and wishes of vocalists; while the jury cheers the fact that he gives the performers and the performability of his music prime position, they still want to encourage him to cross boundaries and not to be afraid to challenge the singers.” 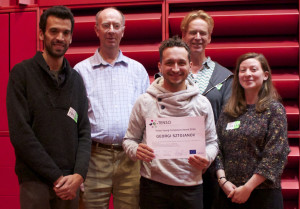