Say hi to Eugene Birman, the winner of the Tenso Young Composers Workshop in 2013. After going through an early round in Stockholm and working with James Wood as a coach, Eugene was appointed winner among the 3 selected finalists. 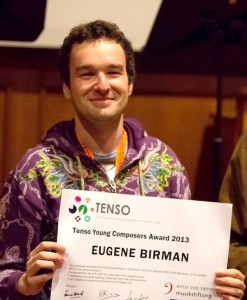 The jury highlighted the careful thought behind Eugene’s work and the communication skills showed during the workshop as key points for the award. He will receive €1500 for the commission of a new choral piece to be sung by Tenso choirs and additional individual coaching. Eugene’s new work will be premiered by Latvias Radio Koris during Tenso Days Mechelen 2014.

On his website, Eugene Birman writes: “in Mechelen, Belgium, it was announced by the members of the jury of the Tenso Young Composers Workshop, that I have been granted the 2013 Young Composers Award and commission from Tenso – the European network for professional chamber choirs. The commission is to write the inaugurual piece in a program among all Tenso choirs marking one hundred years since the beginning of World War I. The opportunity is an amazing one and I am truly proud. But beyond that, I am very grateful to all those whose faith, encouragement, support (and criticism!) have gotten me to this point. The positive attitude and kindness of the Eric Ericsons Kammarkör, conductor Florian Benfer, and chief conductor/artistic director Fredrik Malmberg, their performance and advice, were simply unparalelled. And judging by the exciting programs of the Eric Ericsons Kammarkör, Cappella Amsterdam, and the Cor de Cambra de Palau de la Musica – anyone who still suggests that classical music is in decline should see what happens during Tenso Days!”

Listen to a run-through of the pieces of the three finalists: